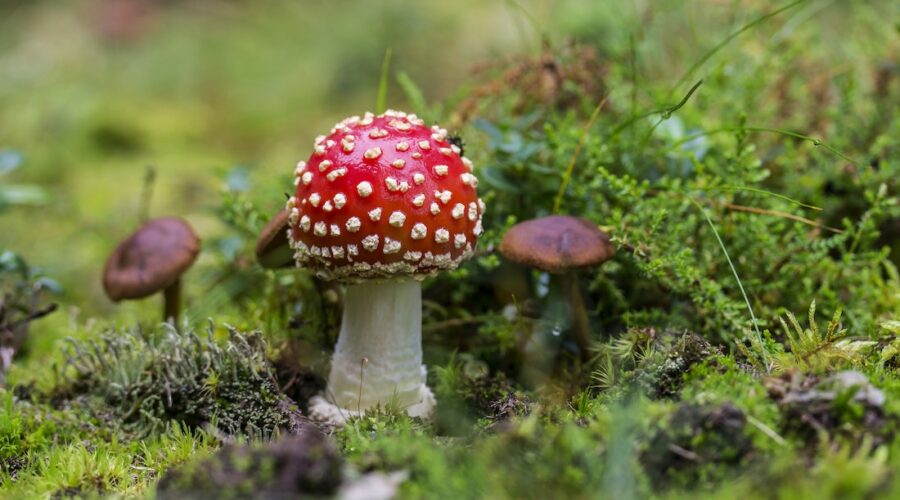 What Is The Christmas Mushroom, And Is It Legal?

The Christmas mushroom (also known as fly agaric, the toadstool mushroom, or Amanita muscaria) is an iconic mushroom and a natural psychedelic. Recognizable for its bright red cap with white spots, it has become closely associated with Christmas.

This connection is worth exploring, as are the many varied aspects of the Christmas mushroom, including its religious use, effects, and legality.

To begin with, let’s describe the appearance of the Christmas mushroom in more detail. It can grow to 20 cm across and 30 cm tall and has a savory smell.

There is a similar-looking mushroom (the blusher: Amanita rubescens), which some may confuse with the Christmas mushroom. The blusher has a similar shape, with a pale, reddish-brown cap and cream spots.

Where And When The Christmas Mushroom Grows

The Christmas mushroom is native to conifer and deciduous woodlands of the temperate and boreal regions of the northern hemisphere. It grows in the following regions.

Its range extends from the northern half of Alaska and northern Scandinavia, Russia, and Japan southwards to mountainous areas of Costa Rica and the Hindu Kush mountain range between central Afghanistan and northern Pakistan.

You can also find fly agaric in Australia, New Zealand, South Africa, and South America. The mushroom is not native to those regions, but is often moving into the southern hemisphere via travelers.

You will typically find the Christmas mushroom growing beneath many types of trees, including pine, oak, spruce, fir, birch, and cedar.

The colorful fruiting bodies can typically be seen between late summer and early winter — the end of August to the end of December.

The Use Of The Christmas Mushroom In Siberia

Many of the indigenous peoples of Siberia traditionally use fly agaric as an entheogen. In western Siberia, the use of this psychedelic mushroom was restricted to shamans. These people use it as an alternative way of entering a trance state (normally, they would achieve trance states through prolonged drumming and dancing). In eastern Siberia, both shamans and laypeople used fly agaric, both religiously and recreationally.

The shaman in eastern Siberia would consume the mushrooms, and then others would drink his urine. This urine still contained psychoactive compounds from the mushrooms. It was observed that consuming the urine led to stronger psychoactive effects with fewer negative effects (as the toxic elements of the mushroom would have been filtered out by the body).

A Theory On The Role Of Fly Agaric In Hinduism

R. Gordon Wasson, the former Vice President for Public Relations at J.P. Morgan, was famed for traveling to Mexico and perhaps being one of the first Westerners to participate in a Mazatec psilocybin mushroom ritual. He participated in the ritual with María Sabina, a well-known curandera (traditional native healer/shaman).

He wrote an article about his travels and mushroom experience, titled “Seeking the Magic Mushroom”, published in Life magazine in 1957. This article introduced psychedelic mushrooms to a mainstream audience for the first time.

Since that experience in Mexico, Wasson continued to write about psychedelic mushrooms. Wasson would eventually turn his attention to soma, a ritual drink described in the Vedas, the most ancient religious texts belonging to Hinduism. In his book Soma: Divine Mushroom of Humanity (1967), Wasson hypothesized that soma was based on the fly agaric mushroom. He tried to draw parallels between Vedic description of the effects of soma and reports of the Siberian uses of the mushroom.

Fly Agaric And The Myth Of Santa Claus

Several authors and academics have proposed that the consumption of fly agaric is responsible for the Santa Claus myth as we know it today. These include the below.

The connections they make between this mushroom and Santa and his flying reindeer are the following.

However, others have argued the mushroom-Santa connection is flawed. For example, this is from historian Ronald Hutton:

“If you look at the evidence of Siberian shamanism, which I’ve done, you find that shamans didn’t travel by sleigh, didn’t usually deal with reindeer spirits, very rarely took the mushrooms to get trances, didn’t have red-and-white clothes.”

The Symbolism Of Fly Agaric

Whether or not the mushroom-Santa connection is true, fly agaric still finds a close association with Christmas. You can find depictions of the mushroom in many historic prints of Christmas cards.

The toadstool also features in many fairy tale stories, as well as the story of Alice in Wonderland, where Alice is given some fly agaric to eat. The mushroom is iconic in the Super Mario games, with two of the Super Mushroom power-up items being based on it. Another famous use of the mushroom is in the dancing mushroom sequence in the 1940 Disney film Fantasia.

In addition, it is common for garden ornaments and children’s picture books to depict gnomes and fairies using fly agaric mushrooms as seats or homes.

The Effects Of Consuming Fly Agaric

The Christmas mushroom has psychedelic effects. However, these are not like the effects you get from ingesting psilocybin mushrooms. This is because the psychoactive compounds found in fly agaric are not psilocybin and psilocin but muscimol and ibotenic acid. These chemicals are also toxins, so they can have a negative effect on the body.

In case of serious poisoning, the mushroom can cause delirium, marked by agitation, confusion, hallucinations, irritability, and central nervous system depression. In severe poisonings, seizures and comas may result.

A trip with fly agaric will last 6-8 hours. However, you shouldn’t expect a psychedelic experience like you would have after consuming psilocybin mushrooms. The quality of the trip will be different and probably not as psychedelic in terms of perceptual, emotional, and cognitive changes. Many users say it has more of a dreamy effect, and users tend to report that it is harder to achieve a psychedelic state with this mushroom.

Also, if you decide to embark on a psychedelic journey with fly agaric, there may be some unpleasant, physical side effects, which makes sense since the psychoactive compounds are also toxins.

The rural inhabitants of Sanada Town in Japan, however, have used techniques for detoxifying these mushrooms (without drinking the urine of those who have consumed them). They will then eat the mushroom as a local delicacy (although the detoxifying methods they use remove the hallucinogenic compounds).

Is The Christmas Mushroom Legal?

There are a few countries where the possession, sale, transport, and cultivation of psychoactive Amanita mushrooms are illegal. These include the below.

It is possible to find fly agaric mushrooms sold in headshops in countries where they’re legal. But since they grow naturally all over the world — and can be legally grown in most countries — you can source these mushrooms for yourself. It’s vital to keep in mind that if you want a reliable and healing psychedelic journey, free from physical discomfort as much as possible, then fly agaric may not be the right option for you. Similar to those using penis envy mushrooms, experiences with the Christmas mushroom are often unique and valuable.