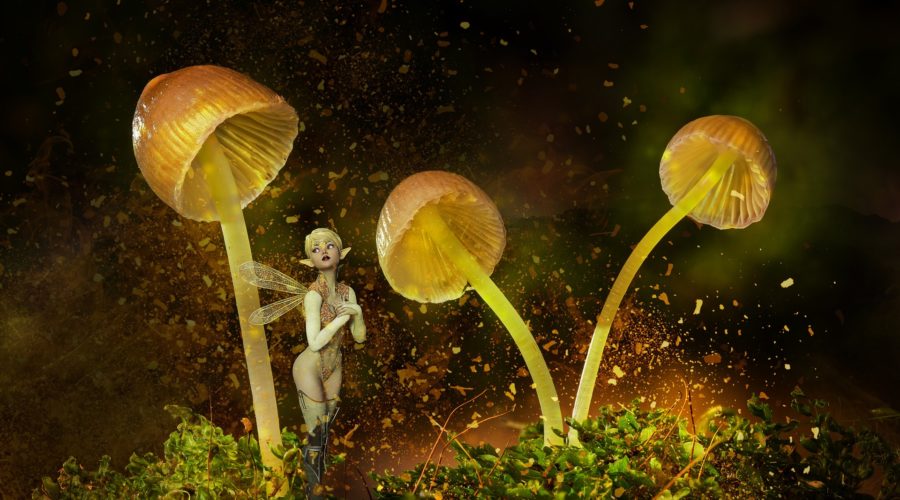 DMT Elves: What Are They, And Why Do People See Them?

One of the hallmarks of the DMT trip experience is seeing, meeting, and interacting with entities. These entities, seemingly conscious and intelligent, can take on many different forms. However, “machine elves” (or DMT elves) is the term that the psychedelic activist and lecturer Terence McKenna used to describe them.

DMT elves are strange entities, as you can tell by the name McKenna assigned to them. But what are they exactly? And why do people see them? There are no clear-cut answers to these questions, but there are certainly different interpretations, which we will be delving into.

What Are DMT Elves?

McKenna often speaks openly about his DMT experiences — and in great detail. In fact, he was one of the first and loudest psychedelic activists to talk about DMT in front of audiences.

The substance was around in the 60s, the heyday of the psychedelic movement. But it was pretty niche. Sure, figures like Timothy Leary, William Burroughs, and Nick Sand experimented with DMT, but it wasn’t widely used or known. That changed in the 90s, however, when McKenna raved enthusiastically about its bizarre effects.

Psychedelic users continue to appreciate McKenna’s descriptions of the DMT experience. Many of his recordings are available on YouTube, as well as in archives — like the one assembled by Psychedelic Salon.

One feature that McKenna often talks about is the entities you meet.

McKenna’s Description Of The DMT Elves

In a recorded interview, McKenna says that in the DMT experience:

“I encounter self-transforming elf machines, which are creatures, entities perhaps, although they’re not made out of matter. They’re made out of, as nearly as I can figure it out, syntax-driving light.”

“They use a language which you see. It is made out of sound, it is sound, but you see it. And the entire point of the encounter, from their perspective, is to teach you to do this.”

“You pass through a membrane of some sort, and you’re in a place. You’re pushed through, and you see the tykes, as I call them. The self-transforming machine elves that are singing in a hyperdimensional language. They surround you and say, “Welcome, we’re so glad to see you.”

This is a common experience. Many other users perceive some sort of indecipherable language being spoken by the DMT elves but perceived visually. The language has often been referred to as runes or alien letters. And the DMT elves often tend welcome you to their space in a friendly and celebratory way. However, during some experiences, they may be more hostile or threatening.

McKenna introduced the terminology “machine elves” or “clockwork elves”, but he is not the only one to experience them. McKenna’s descriptions have helped many users describe and interpret their own (similar) experiences. “Machine elves” have now become part of the DMT lexicon.

There is no single form that the DMT machine elves take. From the name, you would think that they would be half-machine, half-elf — an elf made out of machine parts, in other words.

However, their existence does not come from gears, steam, computers, and engine parts. For many people, DMT machine elves are nothing like the robotic, mechanized creations you see in sci-fi films. So while a DMT machine elf may conjure up an image of a tiny robot with pointy, elfin features, the entity can look quite different in the trip itself.

DMT elves can be made out of fractals, as well as have humanoid, animal, or alien characteristics. Dr. Rick Strassman, who led pioneering research on DMT — recounted in DMT: The Spirit Molecule (2000) — found that people could encounter a variety of entities under the influence of the drug.

He told DoubleBlind that “not that many people in our study saw ‘elves,’ but many saw beings possessing other shapes and forms.”

In DMT: The Spirit Molecule, however, Strassman notes:

“I was familiar with Terence McKenna’s tales of the “self-transforming machine elves” he encountered after smoking high doses of the drug. Interviews conducted with twenty experienced DMT smokers before beginning the New Mexico research also yielded some tales of similar meetings. Since most of these people were from California, I admittedly chalked up these stories to some kind of West Coast eccentricity.

“Therefore, I was neither intellectually nor emotionally prepared for the frequency with which contact with beings occurred in our studies, nor the often utterly bizarre nature of these experiences. Neither, it seemed, were many of the volunteers, even those who had smoked DMT previously. Also surprising were the common themes of what these beings were doing with so many of our volunteers: manipulating, communicating, showing, helping, questioning. It was definitely a two-way street.”

Some of the other forms that the volunteers met included insectoids, dwarves, android-like creatures, reptilian beings, clowns, jokers, and jesters.

In agreement with Strassman’s statement to DoubleBlind, a 2019 small study of DMT users found that when users saw DMT entities, they didn’t look like elves at all. Most entities appeared more amorphous and hard to describe.

A larger study, led by Alan K. Davis and published in the Journal of Psychopharmacology, found that only 10-16 percent of users used terms like “angel” or “elf” to describe the entities. Words like “being” and “guide” were far more common.

Some psychedelic artists have created artworks that DMT users say resemble the machine elves. These include pieces by Luke Brown (see here and here).

The DMT elves often appear to be real, despite being discarnate (without a physical body). In fact, many users describe the experience as “more real than real”.

As Strassman discovered, the entities interact with users. They communicate and share information, which may be in a verbal or non-verbal form. Davis’ study found that DMT entities interact via emotional, intuitive, and telepathic means.

The DMT entities can transmit feelings of love, trust, kindness, and joy. The DMT elves also may be sprightly, cheeky, and mischievous. For McKenna, the DMT elves offer things: “elf gifts” or “celestial toys”, as he calls them. And these objects, which “seem somehow alive”, are felt to be “impossible”.

One volunteer in Strassman’s DMT research described the following encounter:

“That was real strange. There were a lot of elves… [each was] prankish, ornery, maybe four of them appeared at the side of a stretch of interstate highway I travel regularly. They commanded the scene, it was their terrain! They were about my height, and they held up placards, showing me these incredibly beautiful, complex, swirling geometric scenes in them. One of them made it impossible for me to move. There was no issue of control; they were totally in control. They wanted me to look! I heard a giggling sound — the elves laughing or talking at high-speed volume, chattering, twittering.”

The Davis study found that 16 percent of users felt negatively judged by the beings and 11 percent felt maliciousness.

Why Do People See DMT Elves?

It is a mystery why DMT machine elves are a common feature in DMT experiences. There are different explanations as to why they appear.

McKenna presented some theories regarding what these entities were:

These are quite far-out theories, no doubt. There are other explanations based on human psychology.

The term ‘psychedelic’ literally means “mind-manifesting”. These compounds often manifest hidden aspects of the mind — the contents of the unconscious.

According to the psychologist Carl Jung, humans share a ‘collective unconscious’ that contains archetypes: Patterns or images that repeat in myths and folk tales found all over the world. And we find that many cultures have stories about elves or similar beings.

It is possible, then, that DMT brings certain archetypes to the surface of conscious awareness, mixed in with psychedelic effects like fractal visuals. However, it is not at all clear why DMT, in particular, would result in common encounters with elves.

Dennis McKenna, a psychedelic researcher and the brother of Terence, was once asked whether he thought DMT entities were archetypes in the mind or autonomous beings.

Michael Winkelman, an anthropologist who was a professor at Arizona State University for many years, wrote a 2018 paper on psychedelic entities from an evolutionary perspective.

He found that ayahuasca and DMT entities were similar to conceptions of gnomes, dwarves, elves, angels, and extraterrestrials. Psychedelic entities, he states, “exemplify the properties of anthropomorphism, exhibiting qualities of humans.”

Winkelman argues the features of these entities reflect certain innate aspects of human psychology, which evolved for our advantage. These capacities also help explain why people experience spirits and believe in them.

These human tendencies include:

These faculties, if activated by DMT, could account for the anthropomorphic appearances and behaviors of the DMT entities.

The entities may be the end result of the brain trying to predict patterns in ambiguous stimuli, combined with agency detection and the complex fractal imagery that is characteristic of DMT. Indeed, many users report that these beings have a geometric flare to them. Certain fractal or geometric shapes may also lend a certain ‘elfin’ quality to the beings.

There is still a lot we don’t know about DMT machine elves. Scientific research may provide us with further insights into their nature and why they appear. However, the fact that they can seem so real still leaves many questions unanswered.