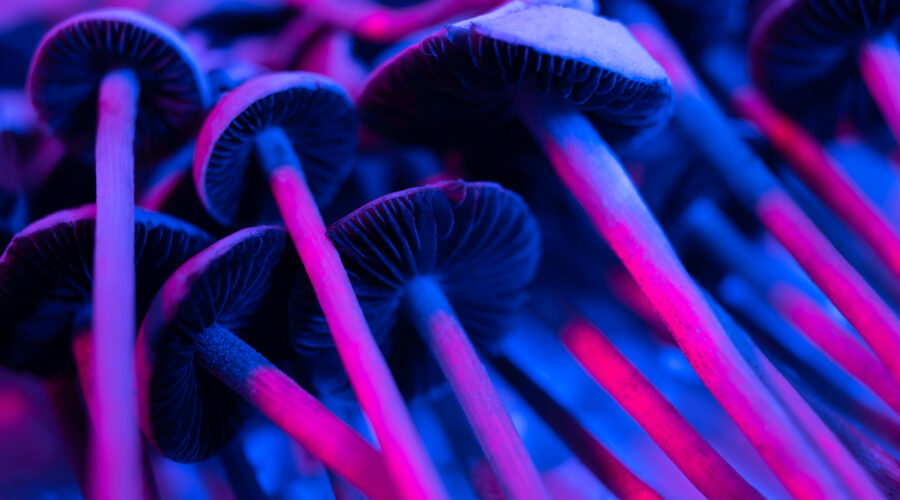 Blue meanie mushrooms (Panaeolus cyanescens, formerly Copelandia cyanescens) — also known as “blue meanies” — are a highly potent species of psilocybin mushroom. You will notice, however, that the first part of its scientific name (Panaeolus) is different from other species of magic mushrooms (e.g. Psilocybe cubensis, Psilocybe semilanceata). This is because it belongs to a different genus. Mushrooms from the genus Panaeolus are common, and they grow all over the world in tropical and temperate environments.

Yet while blue meanies do not belong to the genus Psilocybe (as most magic mushrooms do), they still contain the same psychedelic compounds: psilocybin and psilocin. Many users seek out blue meanie mushrooms because they are one of the most potent magic mushrooms, so you don’t need to take as much to achieve desired effects.

In this guide, we will be doing a deep dive into all aspects of these mushrooms, including:

Of course, always be aware of the law surrounding psilocybin mushrooms where you live, as mushrooms containing this psychedelic compound are illegal in most countries around the world. If you want to grow and possess blue meanie mushrooms, you need to be aware of the legal risks involved.

First, you should be aware that blue meanies grow in the wild. So if you wanted to source them by picking them (instead of buying them from a street dealer or on the dark web), then you need to know what they look like. After all, blue meanie mushrooms have some lookalikes, many of which are harmless, but some are physically risky to consume.

Where Do Blue Meanies Grow?

The first necessary step in identifying blue meanies in the wild is knowing where they grow. This means being aware of the kind of habitat they grow in, as well as the countries where you’ll find them.

Panaeolus cyanescens is a tropical/subtropical grassland species, often found in dung (just like Psilocybe cubensis). They tend to grow on cattle or horse dung in pastures and fields, growing singly, as well as in groups. If you were not aware of blue meanies, you might miss a patch while foraging for the more popular Psilocybe cubensis.

In tropical regions, blue meanies grow year-round. In the subtropics, they grow from late spring to autumn (depending on rain and humidity). They are known to be found in temperate zones during wet and humid parts of summer.

How To Identify Blue Meanie Mushrooms

You’ll be able to identify blue meanies by knowing the distinctive features of the mushroom, which are as follows:

Panaeolus antillarum, for instance, looks very similar, and it was even once thought to be the same species as Panaeolus cyanescens. However, the former has a thicker cap and is lighter in color. Another way to tell them apart is the bluing reaction of psilocybin you get with blue meanies.

You should be aware of the lookalike Pholotina rugosa, found in the Pacific Northwest, as it contains amatoxins. These are the same toxins found in “death caps” (Amanita phalloides), and they can be deadly if treatment is not immediately sought.

Some lookalikes grow on different substrates, which can help in distinguishing between those ones and actual blue meanie mushrooms. For example, Tubaria furfuracea looks similar to blue meanies but it grows on chips and not dung. It has a hygrophanous cap, like Panaeolus cyanescens, yet they are more delicate and not as flexible.

To help with identifying the correct species, you could:

Also, make sure you check all the mushrooms as you collect them and avoid any that don’t fit the description of blue meanies provided above.

How To Grow Blue Meanie Mushrooms

It is certainly possible to cultivate Panaeolus cyanescens, although doing so can be more challenging than if you were to grow Psilocybe cubensis (which is great for beginner growers).

You can grow blue meanies with the right setup, but you need patience and lots of care and attention. Since growing them can be considered a more intermediate and advanced project, only try cultivating them if you’ve had success growing Psilocybe cubensis before.

Panaeolus cyanescens don’t grow as quickly as Psilocybe cubensis, and it generally takes twice the amount of time before forming pins after the mycelium is exposed to fruiting conditions. Also, the longer the mushrooms take to cultivate, the greater the risk of contamination. This is why cleanliness is of the utmost importance.

It’s easier to grow blue meanies outdoors, so that’s worth keeping in mind before committing to an indoor setup.

First, you need to obtain some Panaeolus cyanescens spores. These are the reproductive cells that allow the mushroom to grow. Magic mushroom spores do not contain psilocybin, so they are not themselves illegal. Nevertheless, once they germinate and begin producing mycelium, psilocybin will be produced, making the end product illegal (since psilocybin is a controlled substance in most countries).

Magic mushroom spores are, however, illegal in California, Georgia, and Idaho. In the other 47 states, you’re free to buy and possess them.

There are different ways to get wavy cap spores. One way is to extract your spores from the mushrooms themselves. The more popular option, though, is to buy them online from a vendor selling a spore syringe or print. The spore syringe is an oral syringe that contains just water and the wavy cap spores, while spore prints are little pieces of paper with the spores stamped onto them. The prints are dried and need to be rehydrated when you want to use them.

Growing Panaeolus cyanescens involves the same process as growing other types of magic mushrooms, such as Psilocybe cubensis and its varieties. You should refer to our guide on how to grow psilocybin mushrooms at home for detailed instructions.

But let’s offer a quick summary of the necessary steps:

Whatever kind of magic mushroom you decide to grow, unsuccessful attempts are always a possibility. But this doesn’t mean you should give up. Persistence is key to success here.

Are blue meanie mushrooms strong? The short answer is an emphatic “yes”. But you’ll likely want to know just how strong they are.

Albert Hofmann (the Swiss chemist who first synthesized LSD) analyzed Panaeolus cyanescens in the 1960s (they were then known as Copelandia cyanescens). He found they had high concentrations of psilocin but only slight quantities of psilocybin.

High concentrations of psilocin mean that the effects of blue meanies may come on relatively quickly. This is because psilocin is the psychoactive chemical that causes psychedelic effects, whereas psilocybin is a prodrug that the body metabolizes into psilocin after ingestion.

It is often reported that blue meanies are two to three times the strength of Psilocybe cubensis. But there is little data to support such claims. T.C. Stivje, in 1992, found that they were variable in their potency. They can contain 0.17 to 0.95 percent psilocin and 0.16 to 0.19 psilocybin. Psilocybe cubensis, for comparison, has been found to have concentrations of psilocin and psilocybin ranging from 0.14 and 0.42 percent and 0.37 and 1.30 percent, respectively.

However, research from 2010 — based on commercially grown magic mushrooms seized by German customs authorities — reveals that the highest total amounts of psilocin were detected in dried Panaeolus cyanescens, reaching up to 3.00+/-0.24 mg per 100 mg. This makes modern commercially cultivated strains of this species the most potent psychedelic mushroom ever described in published research.

The above discussion shows that there may be some uncertainty regarding just how potent blue meanies are. Nonetheless, a good rule of thumb is that they are generally quite potent. This means you should take a lower dosage of them compared to less potent species of magic mushrooms (assuming you want a similar intensity of effects).

Based on the levels of potency that blue meanies can reach, it is generally recommended to take half the normal dose of Psilocybe cubensis, and see what the effects are like. The website Shroomery has its own Magic Mushroom Dosage Calculator, which can tell you how many grams of a particular species of magic mushroom you should consume based on how intense you want the experience to be.

With this in mind, as well as Erowid’s dosage recommendations for Psilocybe cubensis, the following dosages for blue meanie mushrooms are a good rule of thumb:

When you consume blue meanie mushrooms, you can experience a range of perceptual, emotional, physical, and mystical effects. They also vary depending on your set and setting, and the dosage that you take. Let’s look at the kind of experience you can expect from different dosages:

A Strong Dose Of Blue Meanies Can Induce Mystical Effects

If you take a high dose of magic mushrooms, and potentially if you take a medium dose, you can experience mystical effects, which classically include:

A blue meanie mushroom trip will generally last between 4-6 hours. This duration is pretty consistent. In clinical trials involving psilocybin, most sessions will last up to six hours. After this time, the participants will no longer experience any psychedelic effects.

But the duration of a psilocybin experience for any individual depends on a few factors:

Psilocybin mushrooms have neither long-lasting nor short-lasting effects. Here is the duration of other psychedelics, so you can get a better sense of this:

The duration of a mushroom trip is comparable to that of ayahuasca (also 4-6 hours). For many users, 4-6 hours of tripping is ideal; it means the experience is easier to fit into a day and less likely to interrupt sleep than, say, mescaline or LSD. But it is also not quick and short-lived like the DMT or 5-MeO-DMT experience, so there’s still plenty of time to digest what is happening.