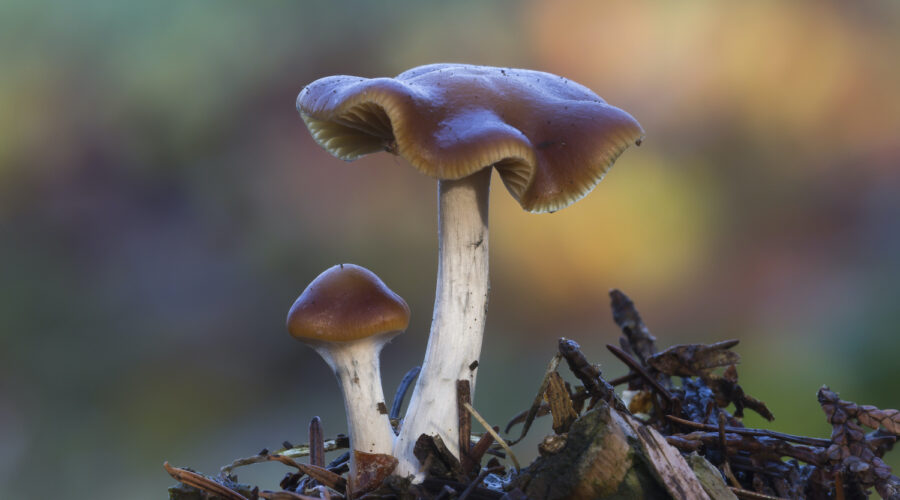 Wavy cap mushrooms (Psilocybe cyanescens), also known as “wavy caps”, are a highly potent species of psilocybin mushroom. They are known as “blueleg brownie mushrooms” in the UK. The name “blueleg” part of the name comes from the fact that the stem bruises blue when handled, while the “brownie” part refers to the brown color of the cap.

Wavy caps may not be as commonly used as other types of psilocybin mushrooms, such as Psilocybe cubensis and its varieties, but many users seek them out for their high potency.

In this guide, we will be covering everything you might want to know about these mushrooms, including:

As always, you should be aware of the law surrounding psilocybin mushrooms where you live, as mushrooms containing this psychedelic compound are illegal in most countries around the world. If you want to grow and possess wavy caps, you need to be aware of the legal risks involved.

It should first be noted that wavy caps grow in the wild. If you want to source them by picking them (rather than buying them from someone), you need to know what they look like.

After all, wavy cap mushrooms have some lookalikes that you definitely don’t want to pick and eat. Some of these are highly poisonous and eating them can make you feel very sick and, if not treated quickly, may be fatal.

Where Do Wavy Caps Grow?

The first step in identifying wavy caps in the wild is knowing where they grow. We can answer this question in two ways: by describing the kind of habitat you’ll find them in and by highlighting the countries — and the specific locations in those countries — where wavy caps grow.

Psilocybe cyanescens grows primarily on wood chips, especially in and along the perimeter of mulched plant beds in urban areas. However, it can also grow on other lignin-rich substrates (lignin is an organic compound that strengthens the cell walls of plants, and is naturally produced in particular by woody plants).

Wavy cap mushrooms do not grow on substrate that is not lignin-rich. The mushrooms have been found in natural settings before (although most appear to be migrations from mulched plant beds). It is not typical for the species to grow on mulch made from bark.

In the United States, Psilocybe cyanescens occurs mainly in the Pacific Northwest, but they can also be found in the San Francisco Bay Area, including in Golden Gate Park. You can also find these mushrooms in New Zealand, Western Europe, Central Europe, and parts of Western Asia such as Iran.

The range in which Psilocybe cyanescens grows is rapidly expanding, particularly in regions where it is not native, as the use of mulch to control weeds has become widespread. Wavy cap mushrooms have also been documented to fruit in Spring on the East Coast of the United States.

Although it has been believed that Psilocybe cyanescens’ native habitat is the coniferous woodlands of the north-western United States or coastal dunes in the Pacific North West, mycologist Elise Wakefield observed this mushroom growing in London’s Kew Gardens, which she described in 1942. An estimated 100,000 specimens have also been found growing on a racetrack in the south of England.

Fruiting occurs when the temperature in the area drops. In the San Francisco Bay Area, this means fruiting will tend to happen between late October and February, with fruiting in other areas usually occurring in fall.

How To Identify Wavy Cap Mushrooms

You’ll be able to identify wavy caps by knowing the distinctive features of the mushroom, which are as follows:

Psilocybe cyanescens has some lookalikes that you should be aware of. The ones that should cause caution are species from the genus Galerina, which can be deadly due to the presence of amatoxins (poisons unique to fungi).

After ingesting amatoxins, people may feel sick within a couple of hours, then recover a few hours later, whereas others experience no symptoms at all. During this time, however, the amatoxins begin causing damage to the liver and kidneys. If individuals don’t receive treatment, then around two days after the poisoning, they can start to feel weak, then very ill, and soon after that, experience organ failure.

Galerina species, such as Galerina marginata (also known as deadly skullcap, autumn skullcap, or deadly galerina), resemble young specimens of Psilocybe cyanescens with their caramel-brown cap. The difference is that they have a brown stem with an annulus. They are poisonous and potentially deadly, as they contain amatoxins.

Other species considered wavy caps lookalikes are from the genera Cortinarius, Hypholoma, and Leratiomyces.

Cortinarius species are reported as lookalikes as some of these species have a blue coloring that fades over time, resembling blue bruising, while some (e.g. Cortinarius obtusus, Cortinarius rubellus) have a brown cap.

You definitely don’t want to eat the fairly rare but deadly Cortinarius rubellus (aptly named the “deadly webcap” mushroom). This is one of the world’s most poisonous mushrooms, as it contains the highly toxic compound orellanine, which can destroy the kidneys and liver. After consuming this mushroom, it can take up to two weeks for any symptoms to appear, by which time the damage has already been done.

Less poisonous but noteworthy mushrooms are Hypholoma species, which can also look similar to Psilocybe cyanescens. However, they grow in dense clusters, which is uncharacteristic of Psilocybe species. They tend to have brown caps with white stems and a purple-black spore print, and some can be poisonous.

How To Grow Wavy Cap Mushrooms

Growing Psilocybe cyanescens involves the same process as growing any other type of magic mushroom. You should refer to our guide on how to grow magic mushrooms at home for detailed instructions, but let’s offer a quick summary of everything you need and the steps you should take.

First, you need to source some Psilocybe cyanescens spores. These are the reproductive cells that allow the mushroom to grow. Magic mushroom spores do not contain psilocybin, so they are not themselves illegal. But once they germinate and begin producing mycelium, psilocybin will be produced, making the end product illegal (since psilocybin is a controlled substance in most countries).

However, magic mushroom spores are illegal in California, Georgia, and Idaho. In the other 47 states, you’re free to buy and possess them.

There are different ways to get wavy cap spores.

One way is to extract your spores from the mushrooms themselves. The more popular option, though, is to buy them online from a vendor selling a spore syringe or print. The spore syringe is an oral syringe that contains just water and the wavy cap spores, while spore prints are little pieces of paper with the spores stamped onto them. The prints are dried and need to be rehydrated when you want to use them.

It’s best to use our detailed guide for following the steps for growing wavy caps. You need the right ingredients, equipment, and hygiene supplies before getting started. The necessary steps will then be:

FROM OUR PARTNER: Want to Save Money in the Long Run? Get Your Own Mushroom Grow Kit Here

Our guide on growing magic mushrooms focused specifically on doing so at home. Yet growing wavy caps at home can be challenging, as these mushrooms require some specific conditions. But under the right climatic conditions, they can easily grow outdoors. If you want to grow wavy caps outdoors, you need to keep certain things in mind.

Psilocybe cyanescens grows on hardwoods such as Alder chips (Alnus rubra) and other woody mulches. These mushrooms will easily grow in urban garden beds mulched with a variety of wood chips. They like shady areas with good moisture, and are known to grow near rhododendrons, rose bushes, and azaleas.

As stated at the beginning of this article, Psilocybe cyanescens is a highly potent species of psilocybin mushroom. It is one of the most potent magic mushrooms, in fact. This is due to its high concentration of psychedelic alkaloids.

To get a sense of its potency, let’s take a look at the concentrations of psilocybin and psilocin in a few different species:

Because of their potency, flying saucer mushrooms are a popular option for microdosing — since you need a very small dose to achieve the intended effects.

Because wavy caps are potent, you will need to take a lower dosage compared to less potent magic mushrooms, assuming you want to get the same intensity of effects.

Based on the average psilocybin and psilocin content of wavy caps, it is generally recommended to take two-thirds the normal dose of Psilocybe cubensis.

Other websites have their own Magic Mushroom Dosage Calculators, which can tell you how many grams of a particular species of magic mushroom you should consume based on how intense you want the experience to be.

With this in mind, as well as Erowid’s dosage recommendations for Psilocybe cubensis, the following dosages for wavy cap mushrooms are a good rule of thumb:

When consuming wavy cap mushrooms, you can experience a range of perceptual, emotional, physical, and mystical effects. They also vary depending on your set and setting, and the dosage you take.

Let’s look at the kind of experience you can expect from different dosages:

A Strong Dose Of Wavy Caps Can Induce Mystical Effects

If you take a high dose of magic mushrooms, and potentially if you take a medium dose, you can experience mystical effects, which classically include:

A wavy cap mushroom trip will generally last between 4-6 hours. This duration is pretty consistent. In clinical trials involving psilocybin, most sessions will last up to six hours. After this time, the participants will no longer experience any psychedelic effects.

But the duration of a psilocybin experience for any individual depends on a few factors:

Psilocybin mushrooms have neither long-lasting nor short-lasting effects. Here is the duration of other psychedelics, so you can get a better sense of this:

The duration of a mushroom trip is comparable to that of ayahuasca (also 4-6 hours).

For many users, 4-6 hours of tripping is ideal; it means the experience is easier to fit into a day and less likely to interrupt sleep than, say, mescaline or LSD. But it is also not so quick and short-lived — as DMT and 5-MeO-DMT experiences are — that the journey feels like being blasted out of a canon while you struggle to absorb what’s happening.