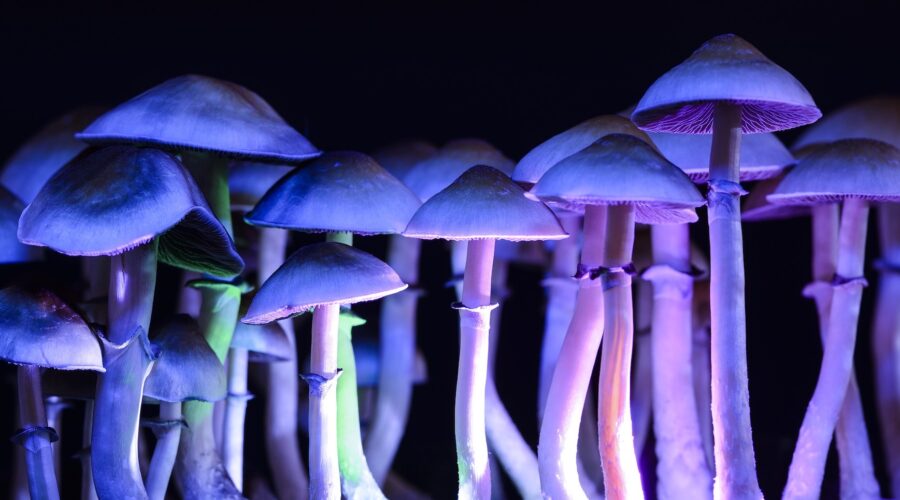 What do shrooms look like? There is no simple answer to this question, as psilocybin mushrooms can vary significantly in their appearance both between species and between different strains belonging to a single species. Remember, magic mushrooms can differ in how they look as much as non-magic varieties.

This article won’t seek to describe what every species and strain of shroom looks like (which would be a hefty task for any article, given that there are more than 180 species of psilocybin-containing mushrooms, not including the numerous strains).

However, we will provide descriptions of three of the most popular species and a couple of strains, the ones you’ll be most likely to come across and want to use — Psilocybe semilanceata, Psilocybe cyanescens, and Psilocybe cubensis. This way, you will be able to correctly identify your mushroom of choice, which is important from a harm reduction point of view.

After all, you want to make sure you’re taking shrooms that you know the potency of and that you know for sure aren’t a poisonous look-alike. We recommend researching the species in depth before foraging.

When it comes to identifying what shrooms look like, you want to pay attention to certain key features of the mushroom. These are the following.

The Cap (the Pileus)

This is the part of the mushroom that gives it its umbrella shape. The cap comes in a variety of colors, including white, brown, and yellow. In the same way that umbrellas protect us from the heat of the sun, rain, and other harsh weather conditions, a mushroom cap protects the pores or gills, which is where mushroom spores are produced. Spores can be thought of as the mushroom’s “seeds” — although, technically, mushrooms don’t have seeds.

The Gills (the Lamellae), Pores, or Teeth

Mushroom gills, or Lamellae) look similar to a fish’s gills. They are also called teeth or pores. The gills are the structures that appear on the undersurface of the mushroom cap, their role is in the production of spores.

The Ring (the Annulus)

The ring (also known as the annulus) is a partial veil that remains on the stem of the mushroom after the cap has fully opened. It is an extra layer of protection for the gills when the mushroom is still very young and developing. When the cap grows and breaks through the veil, the remnant is the ring remains attached to the stem creating a “skirt”.

The Stipe (the Stem)

This is the long, vertical part of the mushroom that holds the cap up above the ground. Mushrooms growing in the wild are propagated from spores scattered by the wind. To effectively achieve this, the cap and gills need to be held high enough from ground level by the stem, so that when the spores are ejected from the gills, they can be easily carried away by the wind.

A great example of this is Psilocybe semilanceata where the cap needs to be high enough above the grass to spead their spores.

The largest structure of a mushroom is hidden from view: this is the mycelium. It is a collection of thin hair-like strands that grow outward and downward into the soil in search of nutrients. Although the mycelium looks like the roots of a flowering plant, this is the body of the fungus, it produces new mushrooms when the conditions are suitable.

For this discussion, you don’t usually need to worry about mycelium, as it often isn’t relevant when it comes to identifying magic mushrooms, but in the case of Psilocybe cyanescens the thick rhizomorphic mycelium and how it attaches to the stem can be helpful in identification.

What Do Shrooms Look Like? The Common Species And Strains

The most popular species and strains of psilocybin mushrooms either grow in the wild, or people grow magic mushrooms at home. You can grow any species or strain at home so long as you have the spores and the right equipment, and you follow the correct process.

Nonetheless, the various strains — those that have been bred to have certain characteristics — aren’t found in nature.

The mushroom takes its common name from the Phrygian cap, or the “liberty cap”, which it resembles. The original liberty cap was a hat worn by freed slaves in the Roman world to mark their status. They were no longer property but not truly “free”. The hat was a symbol of both pride and shame.

As well as resembling the famed cap, there are other aspects of the appearance of liberty caps that you should know about. This will help you to identify them. This species is more or less indistinguishable from Psilocybe pelliculosa. The latter differs in that it has smaller spores.

Psilocybe semilanceata will bruise blue on the stem, typically towards the base, when damaged.

While liberty caps tend to have a thin narrow cap, wavy cap mushrooms have a distinctive undulating cap margin, hence its common name. Psilocybe cyanescens come from a group of closely related species, referred to as “Section Cyanescens”, or as the Woodlovers, due to being often found amongst wood chip mulch, or forest debris.

All parts of Psilocybe cubensis will bruise blue when damaged.

What makes strains distinct is their appearance. Let’s describe what golden teachers look like.

You will get a medium-sized golden teacher mushroom from the first flush (crop) when you cultivate them, but mushrooms in later flushes can be massive in size. Cultivators tend to like golden teachers because they grow in large flushes.

As their name suggests, penis envy mushrooms have a phallic shape. They look very much like a penis. They have a thick and wrinkly stem and are larger than many other types of psilocybin mushrooms.

Penis envy mushrooms have a bulbous cap that only sometimes opens up and separates from the very dense stem.

In terms of color, they usually range from a light tan to a darker brown, with variations amongst the different types. Blue bruising on the stem can be an indication of high psilocybin content. They are also identifiable by their underdeveloped cap and the absence of a veil separating the cap and stem.

Penis envy mushrooms are one of the densest types of magic mushrooms. They may be shorter in height and smaller overall than some other species, but they are still relatively heavy mushrooms, owing to their density.

There are different varieties of these mushrooms, and they have distinctive physical characteristics.

RELATED: How Long Do Shrooms Stay In Your System?

Why It’s Important To Know What Shrooms Look Like

People often mistake certain poisonous mushrooms for psilocybin mushrooms, such as autumn skullcap (Galerina marginata), and the deadly webcap (Cortinarius rubellus). This is one important reason to know what shrooms look like.

Consuming these poisonous species can result in reactions like diarrhea, vomiting, hypothermia, and liver damage, and — if untreated — ingesting them can be fatal. This is why it’s crucial to always read up on the precise appearance of the various aspects of magic mushrooms if you’re going out to pick them.

You can avoid the issue of ingesting a poisonous look-alike by growing psilocybin mushrooms at home. This way, you’ll know exactly what type of mushroom you’ll be consuming. There’s nothing worse than eating a mushroom you’ve picked, experiencing some unpleasant side effects, and then convincing yourself you’ve picked a toxic species by accident.

Before foraging, research and identify the fungi growing in your area that you want to find, get to know their descriptions well, and find lots of photos (some fungi can vary significantly), also seek out information about the lookalike species, and also get to know them really well.

Disclaimer: We do not endorse the illicit use of Schedule 1 psychedelic compounds in a non-therapeutic setting. However, we do hope the regulators look at the research to understand how these drugs can be used in powerfully positive ways.